From Recyclopaedia
Jump to navigationJump to search
Acrylonitrile butadiene styrene

Acrylonitrile butadiene styrene (ABS) is a common Hard Plastic in household goods, engineering and electronic devices. It is typically identified by resin identifier 7, and/or the letters ABS imprinted on parts. The Chinese code for ABS is #9[1][2]. It is easily machined, injection molded and 3D printed, and has high impact strength and relatively good chemical resistance, although poor UV resistance. It is also relatively easy to recycle, and does not degrade rapidly when re-processed. The primary concerns when recycling ABS are avoiding contamination, and ensuring the material is not exposed to temperatures above 400 °C (750 °F). All of the elements of the chemical formuala of ABS are presently derived from oil refining and natural gas, and as a result some companies such as Lego, who have traditionally made products out of ABS are replacing it with more sustainable alternatives.[3]

ABS was one of the most popular materials early on in the RepRap project, however it has since fallen somewhat out of favour, with materials such as Polylactic acid and Polyethylene terephthalate glycol becoming more widespread in recent years, due in part to their reduced rate of shrinkage during processing. As a result of it's mechanical properties, popularity with the RepRap community, documentation on processing ABS is widely available, and it serves as a good plastic for small recycling hubs to work with. It's melt flow index is approximately 5 to 60.[4][5]

Do not burn ABS. When melting ABS, it emits about 10x as many harmful fumes as Polyethylene and Polypropylene. The fumes from ABS are especially harmful and people working with this plastic must wear a fitted gas mask, with activated charcoal filters. When not operating machines related to ABS, keep at least 2 meters away from the sources of fumes, even while wearing a mask. Limit working time with melted ABS to 8 hours a week. 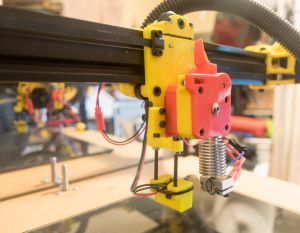 The abundance of ABS as a plastic is largely due to the consumption of finite fossil fuels. High proportions of ABS are not currently recycled, and in some conditions it can break down into it's constituent monomers, which on their own are carcinogenic. Additionally, a large amount of toxic and non-toxic additive materials, as well as varieties in the proportions of the monomers mean that there are some challenges in making consistent, or safe products out of recycled ABS. The best way to avoid increasing amounts of ABS being disposed of is to reduce the use of the material.

ABS products generally are not designed for single use, but some products may have a limited usefulness to the person who originally acquired them. Childhood toys such as Lego may be discarded. 3D prints may be only required by that person for a short time. Finding someone who will utilise these products after you're finished with them can help reduce waste. Toy libraries are a good place to start for reuse of some ABS products.

A large source of ABS as waste comes in the form of E-waste. Plastic covers for electronic devices often end up discarded by E-waste processors as they come in a variety of plastics which are not readily recycled. It is possible to avoid this wastage by repairing electronic devices. The open source project https://www.ifixit.com/ provides instructions for a growing number of electronic devices, many of which are possible for the end user to follow.

Additionally, products made out of ABS where the plastic has worn or cracked with use can be repaired easily with common household glues such as superglue, or with acetone, which acts as solvent for ABS. Acetone will melt ABS, allowing for cracks to be healed. It is also possible to create ABS Slurry, a thick paint like substance, by mixing ABS with acetone, to fill gaps, and repair chips. Also, as with most thermoplastics, ABS can be remelted with heat. It begins to soften at it's TG of approximately 100c, and flows effectively at 230-260c. However at temperatures of 400c it will become hazardous and care to not expose it to higher temperatures, or to work with it without adequate ventilation must be taken.[6]

Plastic containers made out of ABS are often well suited to continued use in new applications after their original purpose has expired.

Once you have identified your plastic as ABS, it can be important to attempt to keep parts of similar sources together, rather than intermingled with ABS of other sources. This can help later with other recycling processes, where you may prefer consistent behaviour from your end product.

At home or in your community[edit]

There are a number of ways to process ABS with relatively simple tools. Many of the common techniques shown for plastics such as HDPE on Youtube, where the material is simply heated in an oven until molten will work well with ABS, with the notable caveat that ABS shrinks somewhat substantially as it cools. This can in fact be an advantage when producing objects that don't need to have precise dimensions as ABS will break free from molds with much less effort than some other plastics.

As mentioned above, ABS can also be turned into a slurry when mixed with acetone. The resulting material can be used as a gap filler, or coating for other items.

ABS can also be reprocessed into flakes, using a shredder, and then 3D printed utilising a pellet extruder. Flakes can also be converted into new filament, compatible with most FDM 3D printers.

Kerbside recycling in Australia in most jurisdictions states that it takes plastics with resin identifier 7 (other), but information from public sources as to which plastics under this umbrella are processed by the facilities in this stream is scarce. Efforts by some members of the community to find businesses that will take sorted ABS for industrial processes can be frustrating, as volumes worth trading in are substantial, and businesses often prefer to avoid dealing with contaminants. However, businesses that recycle ABS such as Recopol do exist domestically, and they may be receptive to approaches where a substantial supply of ABS is available.

As one of the chief sources of ABS plastic tends to be electronic devices, one of the ways to ensure that it is recycled is through product stewardship. Certain companies already engage in this practice. The following is a quote from Acer specifically referring to the recycling of ABS in a product stewardship scheme announced in 2013.

Returned items will be dis-assembled and the components will be broken down into various commodity types including steel, aluminum, copper, stainless steel, glass, PCB, fiberglass, rubber, plastic ABS, plastic PVC and other types of plastics.

Script error: No such module "Check for unknown parameters".